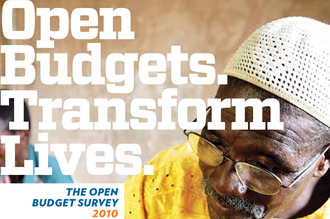 The International Budget Partnership (IBP) released the 2010 Open Budget Survey results at the end of October 2010. The survey considers the public availability and/or accessibility of eight key budget documents, in addition to asking a series of questions on the breadth and depth of information in these documents and the openness of key budget processes. The Open Budget Index (OBI) comprises selected questions from the survey for which a composite score is calculated for each country, with 100 being the highest score possible.

How did Africa perform?
Out of the 94 countries that were assessed:

How rapidly improvements can be made in Africa when there is the political will is illustrated by the magnitude of the improvement achieved by the 13 African countries that increased their scores. On average, these countries improved their scores by 10.6 points. The countries (with the extent of the change indicated) are Liberia (37), Angola (22), Malawi (19), Tanzania (10), Rwanda (10), Sudan (8), Egypt (6), Namibia (6), Ghana (5), Democratic Republic of the Congo (5), South Africa (5), Uganda (4) and Morocco (1). In the rest of the world, the average improvement was 5.7 points. The quick progress made by Liberia, for example, can be attributed mainly to the Liberian government now publishing an executive budget proposal, as well as in-year, mid-year and audit reports.

However, in addition to being disproportionately represented in the bottom two categories – where 44% were African compared to the 29% in the total sample – a higher proportion of the African countries surveyed slid backwards and by a larger average than in the rest of the world. In total, 12 of the 25 African countries represented in both the 2008 and 2010 surveys scored less in the 2010 survey, by an average of 8.2 points. In the rest of the world, 25 out of the 61 countries in both surveys scored less, by an average of 2.6 points. The African countries that performed worse are Niger (which scored 23 points less), Botswana and Zambia (11 points less each), Burkina Faso (9 points), Kenya (8 points), Chad (7 points), Cameroon (3 points), Sõo Tomé e Principe and Nigeria (1 point less each).

According to the 2010 Open Budget Survey Report, countries that perform poorly on the OBI tend to share characteristics such as low levels of income and democracy, as well as a high dependence on aid and/or on revenue from natural resources like oil and gas. The 10 African countries in the group of 13 countries that scored less than 10 points in the 2010 OBI are all characterised by such conditions. Altogether, only 9 out of 26 African countries perform above average.

Main recommendations
The 2010 report notes that relatively quick progress can be made by providing information, which is already produced internally, to the legislature and online and by inviting public participation. Reducing access to information, by no longer publicly providing documents or closing down participation, leads to lower OBI scores. This has been the case for Niger (which stopped publishing an executive budget proposal and year-end report), Botswana and Zambia (both of which did not provide in-year reports for the 2010, having provided them for the 2008 survey).

In addition to public accessibility of key budget documents, the IBP recommends the following general measures to be adopted in order to increase budget transparency:

These recommendations are in line with the Status Report on Good Financial Governance in Africa which, in addition to highlighting opaque budgets and budget processes as a key reform priority, emphasised the urgency of restoring the functioning of constitutional oversight institutions in the public resource management cycle. CABRI will be embarking on a programme of work with participating countries over the medium term to improve fiscal and budget transparency.

Transparency and accountability, Budgets in Africa