Clear, effective communication is an important function of an organisation such as CABRI – but, particularly when dealing with complex and often interrelated issues, this can be a tall order.

This is why CABRI, in partnership with the Overseas Development Institute [http://www.odi.org/programmes/aid-public- expenditure/public-finance-management (ODI) and South African National Treasury [http://www.treasury.gov.za/], took an innovative tack following their Finance Ministries of the 21 st Century conference, held in Johannesburg on 25 and 26 March 2015: instead of summarising key points from the event in a written report, it expressed them in the form of a series of cartoons.

All seven cartoons were drawn by Andy Mason [https://www.facebook.com/andy.mason.3348], of Azania Mania Art Kolektiv, and funded with UK aid from the British people, using key points from the conference (and one from a discussion at a dinner preceding the conference).

“We could simply issue a conference report or even a summary, but what we really need to achieve is for people to consume – and retain – such information. The cartoon series we commissioned does exactly that: it presents the conference’s key points in a vivid, easily digestible, memorable way,” says Neil Cole, CABRI’s executive secretary.

“It’s very important to capture the essence of the issues discussed at such an event, and provide delegates – and others – with key take-aways from it in a way that immediately makes its compelling to tackle the challenges.” adds Kay Brown, chief director for expenditure planning at the South African National Treasury.

The seven cartoons and their meanings are as follows: 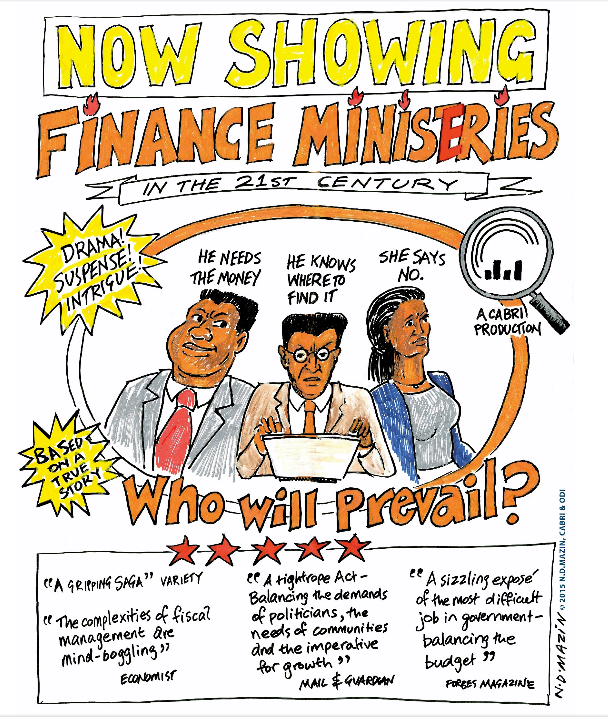 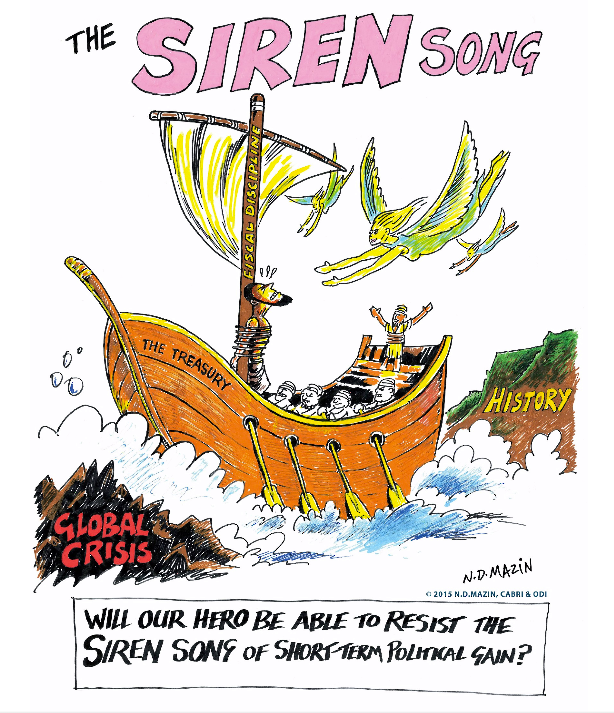 Using the classic Greek metaphor of Odysseus braving the Sirens to get home to his wife Penelope, this cartoon illustrates the temptations and dangers that face finance ministry officials. The Sirens can cause a person to lose all sense of perspective; all your hard-earned knowledge and experience evaporates, you become demented, your ship runs aground on the rocks and you swim ashore, never to be seen again. 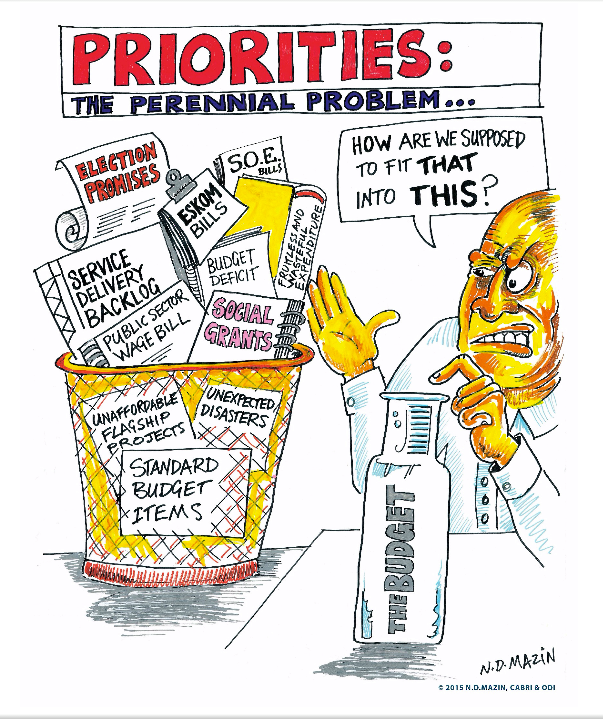 It is inevitable that the basket of needs and demands is always going to be larger than can be provided for by the budget, which is represented in this cartoon as a glass bottle used in laboratories to mix chemicals. The cartoon demonstrates that trying to cram everything that needs to be paid for into the budget is an impossible task. 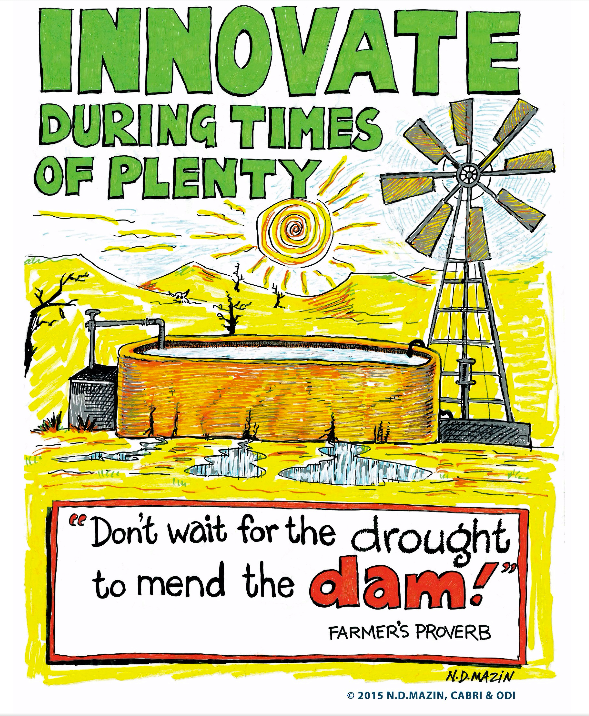 This cartoon uses a leaky dam to illustrate the idea that one shouldn’t wait until there is a crisis to fix a problem. In times of plenty, there is time to think but often innovation is lacking, as there are no pressing fiscal problems to solve. In times of stress, there is space to act but not always time to think about how best to innovate. Innovation during in times of plenty – not waiting for the drought to mend the dam – shows real foresight, however. 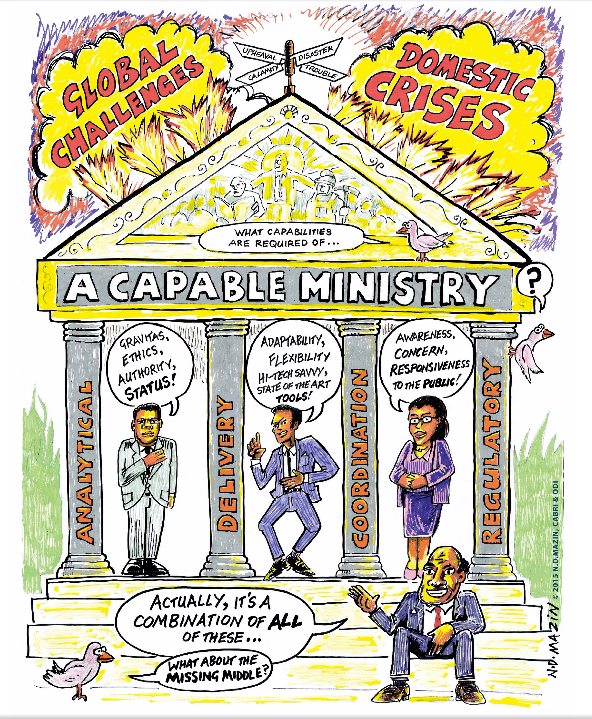 ODI research proposes that finance ministries rest on four capabilities: analytical (digesting and processing information to give advice and make political decisions), delivery (producing key deliverables on time), regulatory (controlling the production of particular services delivered by others) and co-ordinative (managing the activities of other parts of government to produce certain results and outcomes). This cartoon suggests these – and several additional – capabilities are necessary, in combination, for ministries to succeed. 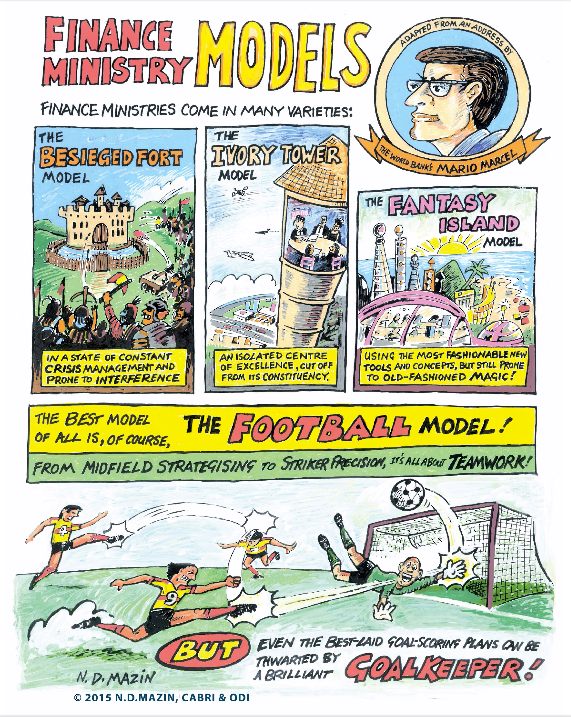 Based on a presentation by Mario Marcel of the World Bank, this cartoon suggests four finance ministry models: the besieged fort (operating in perennial crisis mode), the ivory tower (excellent, but out of touch), the fantasy island (the most fashionable tools aren’t relevant to the issues) and the football model (teamwork produces results – but there’s always the other side’s perspective to consider). 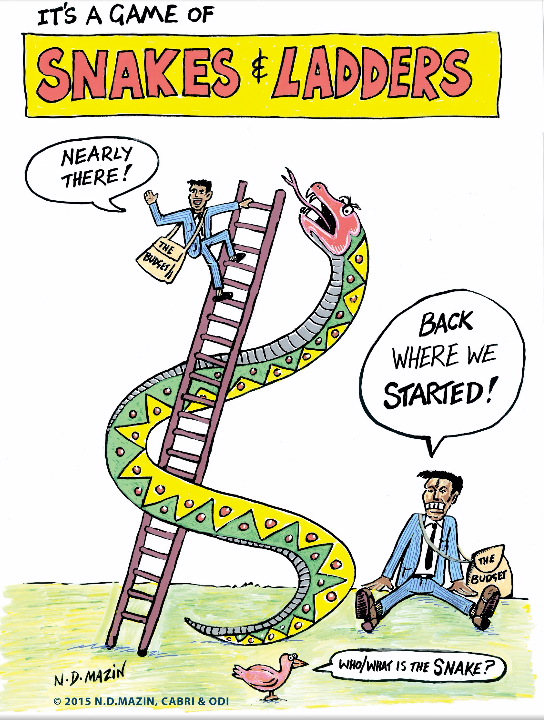 This cartoon uses the game of Snakes and Ladders to represent the pitfalls facing finance ministry officials as they try to balance the complexities of a budget. Just as they make progress to reach the top of a ladder, they hit a snag – such as political interference, which bypasses the budget allocation process and undermines its credibility – and they slide down the snake, back to square one.

“These cartoons, drawing as they do on the experiences of finance ministry officials from across Africa, illustrate the universality of many issues they face – matters of ethics and temptation, overwhelming needs and insufficient budgets, institutional capabilities, best practice, and political interference,” says Philipp Krause, ODI’s public finance team leader.

Cole concludes: “While there is no cookie-cutter solution to these dilemmas – CABRI believes that context matters, and different countries must find their own answers – it is heartening for our members to know that they have challenges in common. Now that they are identified, we can work together to identify the best ways to address them.”