The release of the Open Budget Tracker (OBT) by the International Budget Partnership (IBP) is a useful development that allows real time tracking of the progress being made by countries on the transparency of information. The OBT monitors on a monthly basis if governments are making progress in releasing the eight key budget documents to the public. The OBT was first released in October 2014 and only nine African countries are covered at this stage.

The functionality of a Public Financial Management system depends on many factors, including the type of budget information a government produces and makes available and how regularly it does so. For example, in order for budgets to be credible, budgets need to be comprehensive and need to give a binding expression to the priorities and plans that public funds will be used for. To ensure effective accountability, financial reporting also needs to be comprehensive and timely, to allow comparison between actual and planned spending.

The most recent OBT data (December 2014) reveals some encouraging progress for most of the countries that have participated in the CABRI/IBP budget transparency project[1] (see chart below[2]), but for others there has been less positive change. 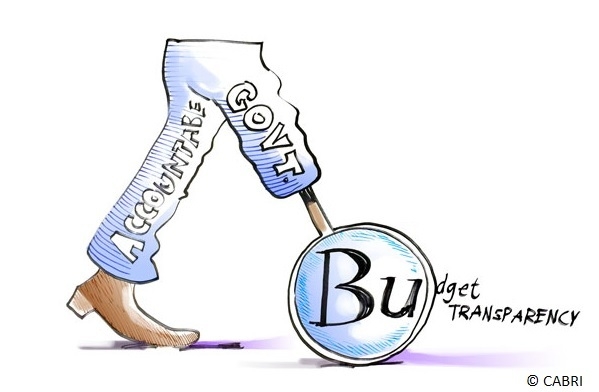 We are awaiting the IBP's release of the Open Budget Index (OBI), later this year, with much anticipation. The OBI measures levels of budget transparency and participation based on the quality, timeliness and availability of published budget documents.

Countries which have started at a low level of budget transparency are more likely to achieve substantial improvements in transparency over the short to medium term. This is largely attributed to making available budget documents that were already being produced but not previously published, or deciding to include in budget documentation information that is readily available.

Hence, there is scope for countries such as the Democratic Republic of Congo and Tunisia to see strong improvements in their new OBI scores. Tunisia can, for example, publish a mid-term review with relative ease as it is already undertaking a similar exercise internally. Likewise with the DRC, who can publish the analysis contained in the already produced year-end report.

It is more challenging for transparency to improve in countries where moderate levels have already been reached, such as Kenya, which publishes seven out of the key eight budget documents. High levels of transparency require the inclusion of specific types of information in budget documents, which may require additional capacity and resources to improve information gathering and management capabilities.

In Kenya, three issues will likely be critical in ensuring there is further positive change.

i) Improving coordination between different reforms, for example, by linking programme-based budgeting (PBB) with transparency efforts. Changes to the executive budget proposal (EBP) under

the implementation of PBB can also be considered as an opportunity for greater transparency. Programmes can be refined to better align with policy priorities to promote accountability. Non-financial information included in the EBP can also be further developed.

iii) Strengthening the Ministry of Finance's role in facilitating an enabling environment for effective accountability. The Ministry of Finance can for example ensure it shares documents with civil society ahead of engagements, as well as enable feedback after the conclusion of decision making processes. Participation mechanisms also need to be developed at the county level.

In recent years, Kenya has gone through a major constitutional transition from a centralised to a devolved system of government, with the establishment of 47 counties. The constitution also involves a restructuring of the roles of the executive and the legislature in public financial governance, the fragmentation of the national budget into three components, the creation of various public funds and a new key budgetary institution, the Controller of Budget. Consolidating these gains in a carefully sequenced approach in line with capacity growth will be key to the efforts of strengthening budget transparency.