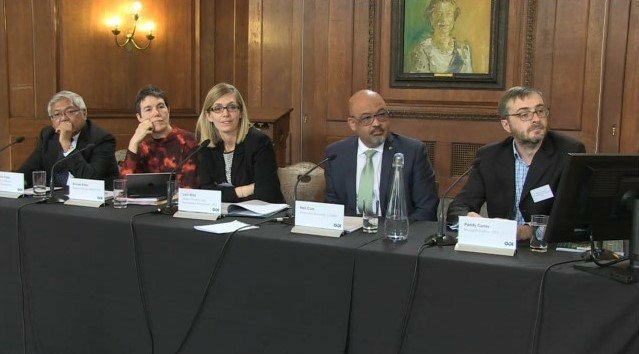 Neil Cole and Joana Bento from the CABRI Secretariat participated in the 2016 Conference on Aid and Public Expenditure (CAPE) in London on 19 and 20 October. The CAPE event is held annually by the Overseas Development Institute and attracts public officials, academics, and development experts from all over the world. This year’s conference was framed as a consensus building exercise on ways that development assistance (aid) can be delivered more effectively in the era of the Sustainable Development Goals. The conference theme was chosen to coincide with the Nairobi 2nd High Level Meeting on Development Effectiveness.

CABRI’s contribution at the London conference focussed on the progress that has been made by development partners (donors) in their use of country systems in the delivery of aid, and ways that even greater progress can be made. Below is an extract of CABRI’s contribution.

Several international agreements call on donors to use country systems to the maximum extent possible. These agreements acknowledge that when countries’ own systems are used there is a potential pay-off of increased investment in strengthening these systems.

We believe that there are several reasons for this.

Budget support is an aid modality. The commitment to increase the use of country systems is a principle that commits development partners to use the systems of a country for the delivery of aid, irrespective of the aid modality that is in place.

We should think of country systems not as one system, but as separate components (diagram 1). The eight components are typically the ones that are used for the strategic allocation, disbursement, and accounting for government revenue.

Where country systems are not used, either in its entirety or just one or more of the components in diagram 1, donors will establish parallel systems that they have full control over, especially in the procurement of goods and services. It is important to acknowledge that the fiduciary risks differ across each of the eight components. For instance, including all aid on the plan and budget process carries far less fiduciary risks for donors than their use of the local procurement systems for the delivery of aid funded projects.

It is useful for the high-level forum on development effectiveness in Nairobi to distinguish the individual components, instead of referring in general terms to use of country systems. This is important because the commitment to “full use of country systems” is biased towards budget support, which is a political instrument that not all donors can commit to.

CABRI calls for all aid to be:

The remaining components, such on-procurement and on-audit carries a higher fiduciary risk. Joint assessments at a country-level should determine the state of these systems and agree on the actions that are needed and timeframes for their use.

In conclusion, when making decisions about the systems that can be used, attention must also be paid to the long-term developmental risks of not using country systems. Understandably, donors will be hesitant because they forfeit some degree of control over their development assistance, which can be perceived to increase the risk of activities not being implemented or of funds not being used as intended. These risks are short-term and donor-specific. The benefits of using country systems, however, are developmental and long-term.

Transparency and accountability, Use of country systems