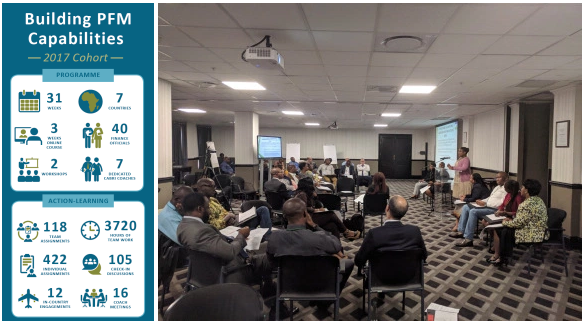 We just held our final workshop for the Building PFM Capabilities in Africa Program, in collaboration with CABRI, in Johannesburg from December 11-13, 2017. Teams from Ghana, Liberia, Nigeria, Sierra Leone, South Africa, The Gambia, and The Kingdom of Lesotho, participated in this program.

During the workshop, each of the seven country teams presented their initial problem statement, fishbone diagram, progress over six months, engagement with key stakeholders, key outputs and achievements, lessons learned as well as their next steps. This was followed by a round of comments and questions from each of the other country teams. The level of engagement on substance, the insightfulness of questions, the respect for one another, and the comradery in the room was like a breath of fresh air. It was hard to believe that this group of people had only met once before at a workshop in May 2017. This is a far cry from similar workshops where participants are often physically present but mentally checked out.

Over the period of seven months, these teams have achieved real results. They have increased revenues, increased reporting, prepared budgets in a timely fashion, decreased arrears, increased political authorization, increased collaboration with MDAs, collected more evidence on their problem, conducted more targeted training, earned the support of their minister, and formed new peer networks outside their country. As each team made their presentation, there was a deep sense of pride, joy and empowerment. This was work that they had done by themselves, without any external consultant or expert telling them what to do. It reminded me of something Nadim Matta had said at our first DDD conference in 2014. He had described success as when your team is on the field playing the game by themselves and you are on the sidelines of the field cheering them on. My experience over the past two days was exactly that. The BSC and CABRI teams sat back and listened to the country teams talk about the process they had followed, the results they had achieved, and how they wanted to take this work forward. It was their moment to shine, not ours.

as well as comments made by the authorizer of the Sierra Leone team,

and the authorizer of The Kingdom of Lesotho team.

We will be posting the country team presentations, photos and videos. Stay tuned for more!

Note: This blog was originally published on the website of The Building State Capability (BSC) program at the Center for International Development (CID) at Harvard University