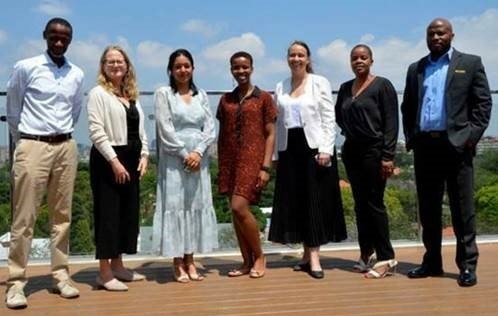 This article features in the National Treasury of South Africa’s ‘News in Brief’ of 7 December 2021.

A delegation of senior South African Revenue Service (SARS) and National Treasury officials who participated in a year-long international Capability Building programme (ICBP) got the opportunity this week to give feedback on the lessons they have learnt.

The ICBP is an initiative of the Swedish International Development Cooperation Agency (Sida) and the Swedish Tax Agency (STA) in collaboration with Collaborative Africa Budget Reform Initiative (CABRI). It is an applied, year-long programme, offered part-time and, focuses on improving voluntary tax compliance. Delegations from tax administrations and ministries of finance from four African countries, including SARS, were invited to collaborate and get insights on different areas that are significant for promoting voluntary compliance and identifying key constraints in improving compliance in their own countries.

SARS’ invitation follows on a 2019 engagement with the STA, in South Africa, to discuss possible collaboration and support with a view to build capacity within an organisation. SARS was particularly interested in participating in the STA and SIDA’s newly developed ICBP, this due to its focus on mobilising domestic revenue through voluntary compliance. This initiative enhances SARS’ own strategy of achieving voluntary compliance to give effect to our mandate. The programme uses the Problem Driven Iterative Adaptation (PDIA) approach, which is based on the principle of learning from repeated and varied attempts at trying to resolve a specific problem – with the aim to refine possible action steps identified. This supported the team to gain insights and knowledge in identifying and solving problems that previously seemed insurmountable to them.

The other participating countries included Kenya, Nigeria and Zambia.

Ms Westling Palm, Director-General of the Swedish Tax Agency, said the importance of improving trust in the tax system, tax morale and voluntary compliance, is widely recognised. However, much of the focus of domestic revenue mobilisation has been on international tax policy and building capacity of tax administrations. “In contrast, understanding and improving tax morale has been relatively neglected. The ICBP holds the potential for participating countries to increase revenues, whilst relying less on enforcement efforts,” she said.

During the programme the participants, supported by international coaches, focused on developing local solutions to address country specific constraints through the implementation of incremental change in their own countries. following a problem-driven approach, with most of the work being done in South Africa.

In building capability in the organisation, SARS Institute of learning (SIOL) together with International Cooperation remain central to coordinate the implementation of this programme beyond the intervention session. The learning involves bilateral discussions with other international revenue organisations, business authorisers (within SARS and NT) and other identified stakeholders.

Mr. Johnstone Makhubu, Chief Revenue Officer visited the team Mzansi during this intervention session, hosted at Protea Loftus Marriott Hotel to acknowledge the vital importance of the work done by STA (with support of CABRI), SARS and National Treasury officials during this programme. He acknowledged how the PDIA approach is a useful tool for enhancing the organisation’s ability to solve its voluntary compliance problems (this based on the fact that the team focused on improving voluntary compliance within the small business PIT and CIT service offering). He emphasised that the strategic objective of SARS is to leverage voluntary compliance in customs and tax, recognising that it is imperative to ensure sustainable compliance in the longer-term while ensuring that this is fully aligned with a voluntary compliance approach. He pointed out that a compliance mindset should be guided by the assumption that all taxpayers are people that want to comply. Further, compliance risk is recognised by SARS as needing increased attention. Given the fact that voluntary compliance rates have decreased over the past four years, Johnstone is appreciative of Sweden’s assistance in this area, which will feed into the machinery of SARS’ voluntary compliance. The struggle of smaller business can be focused upon more ardently in the Commissioner’s future leadership discussions on voluntary compliance. SARS aims to deliver on the strategic objective of working with other stakeholders that feed into the larger eco system, which this initiative actively contributes to.