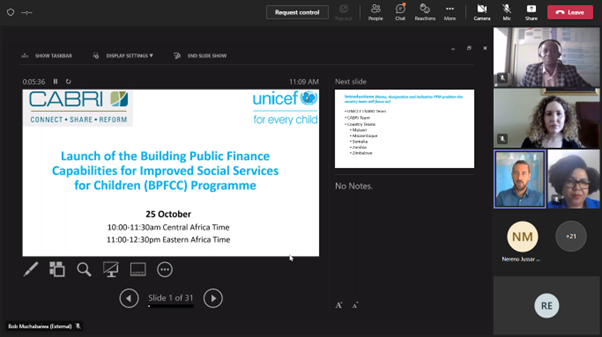 The BPFCC programme, CABRI’s second partnership with UNICEF after the ongoing programme on programme-based budgeting with UNICEF Algeria, will provide training using the Problem-Driven Iterative Adaptation (PDIA) approach to help determine: (1) local solutions to local problems; (2) how local teams of government officials are best placed to carry out reforms; (3) how to push positive deviance; (4) how to scale through diffusion; and (5) how to try, learn, iterate, and adapt. “It is evidenced that these trainings – using the PDIA approach, has allowed participants in the programme to determine what critical PFM issues impact their National Development Goals and find solutions through a well-defined, tangible and measurable problems solving tool that incentivises agents to take risks, question the status quo, create dialogue, and provide the basis to search for alternatives,” affirmed Soonsyra Lowe Nicolas, Acting Executive Secretary of CABRI in her opening remarks.

Danielle Serebro, Programme Manager at CABRI explained that when observing ‘form’ vs. ‘function’, “focus has been on modernising systems and introducing new best-practice policies rather than improving functional outcomes.” Various international bodies and governments have provided support for reform in Africa, reform ownership, hence, the PDIA approach.

The programme will therefore focus on tackling public finance problems in key social sectors that particularly affect children, such as education, nutrition, health, and social protection. As such, the country-teams will comprise of a mix of public finance officials from both the Ministry of finance, sector ministries and/or local government agencies of relevance to the problem identified. Potential public finance may range from planning and budgeting to execution whilst careful consideration will be taken to ongoing reform initiatives in the respective countries.